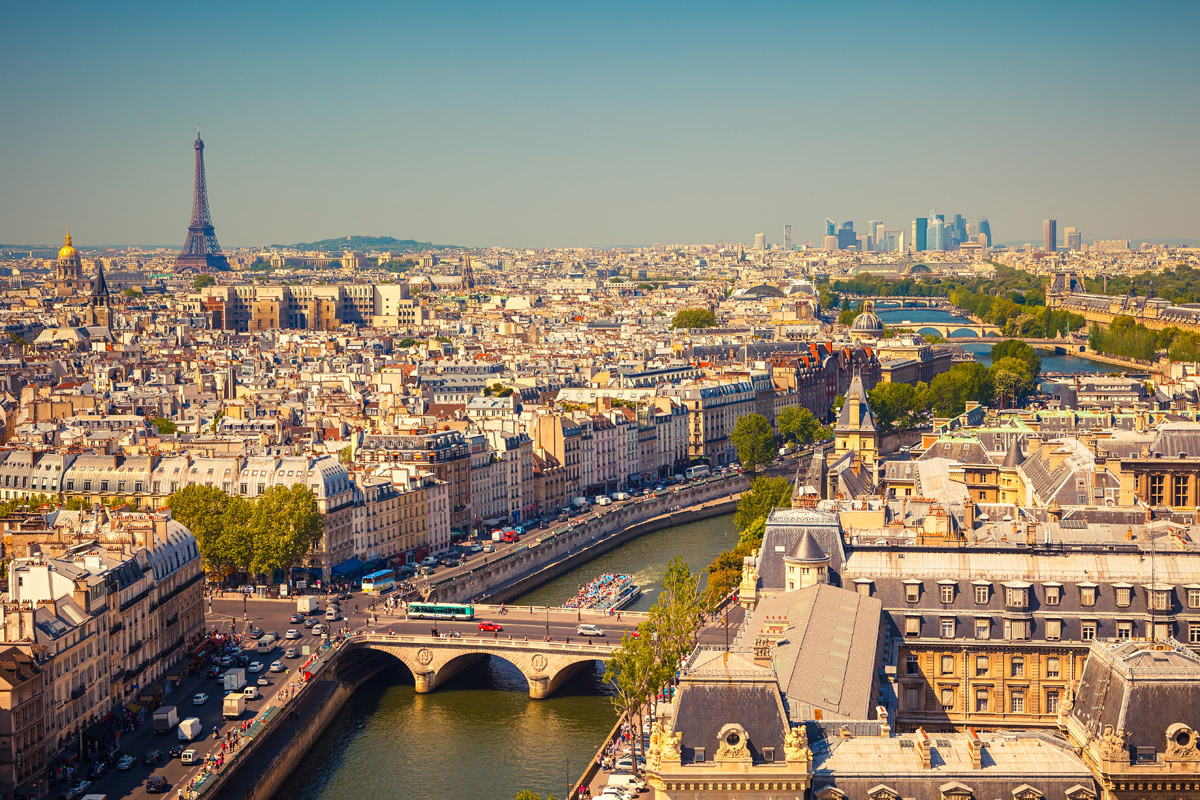 Some languages have a reputation for sounding harsh (looking at you, German) or for having crazy grammar (ahem, Hungarian), but there’s one that’s world renowned just for sounding lovely: French. Sounding sweet isn’t the only thing French has going for it, either. The reasons for learning French are as numerous as cafes in Paris.

In this post, we’ll dive into what exactly makes French a language worth learning. Read on to find out why the language of love is one everyone should learn.

Why Should I Learn French?

1. Travel to a French-Speaking Country

The way proficiency in French will affect your experience in a French-speaking country deserves to be at the top of this list. It will make everyday activities easier and more enjoyable, it will enable you to interact with the people around you, and it will give you a much better sense of place.

It’s also worth mentioning that there are an impressive 29 countries where French is used as an official language. You could spend most of your life going to new French-speaking countries and not run out of new places to visit!

Whenever visiting a new country for the first time, there are many things that will take getting used to. The layout of the city you’re in, navigating the transportation system, a new cuisine, different cultural norms, and a new currency are some examples of the newness you could be facing. There’s often some confusion associated with growing accustomed to these novelties, and this is exacerbated if it’s all happening in a language you don’t speak.

The ability to speak and understand French in a country where it is spoken as the primary language will make everything easier. Simply being able to ask people for help is a major advantage when you’re somewhere new. Needing to rely on the few English speakers you find can seriously limits what you can accomplish in a new place.

By being able to understand what people are saying around you, you’ll be able to get a much better sense of what life is like wherever you are. It’s amazing what you can learn by listening to the people around you in a market or train station. You’ll also be exposed to things like bulletin boards, advertisements, and news broadcasts. All of this extra information can help you reach a more complete understanding of your environment.

There’s no getting around it. French has a strong reputation as a language with the power to woo women and men alike. It’s up for debate whether this is thanks to movies and media or that the actual sounds that make up spoken French are objectively pleasing, but the fact remains: French is sexy.

This could be a great motivator for anyone learning a language. Who doesn’t want to sound more attractive? Speaking French is an impressive skill that others will at least appreciate listening to, even if they don’t understand what you’re saying.

3. It’s in the Top 5 Most Spoken Languages

There are around 275 million people that speak French in the world. That’s an enormous number, and it makes French a valuable language to learn. Not only does it mean you’ll be able to communicate with millions of extra people, it means you’ll be open to more opportunities and will likely have an easier time learning the language than one with fewer speakers.

The opportunities available for French speakers are many and varied. Since French is spoken by so many people in so many countries, the language has a clear potential for opening up business opportunities. Being able to network with people from different economies is an amazing way to build global connections and means there’s a high chance you can find opportunities in whatever industry you’re interested in.

Another advantage that learners of French have is that there is an almost endless supply of material for learning the language. Because French is so widely spoken and learned by so many people each year, there is no shortage of companies and individuals creating material to meet the demand.

The abundance of learning material is great for learners because it means that there are all types of resources catering to all types of learners. Whatever your preferred learning method and level, you should be able to find something that’s just right. Practice listening with podcasts or YouTube channels, speaking with a language partner or tutor online, and practice reading with story-based online courses.

Maybe one of the most rewarding aspects of learning any new language is the chance to make connections with new people. Making new friends because of your efforts to learn a new language is an incredible experience.

The most obvious way learning French could lead to making new friends is by allowing you to speak to people with whom you didn’t previously share a common language. Not only will you be able to speak the language of more people in the world, learning French will show speakers of the language that you’re interested in their culture. People often openly show appreciation when others take the time to learn their language.

Thanks to its status as one of the most-spoken languages in the world, there are French speakers everywhere. Even if you aren’t in a country where French is an official language, chances are there’s a community of French speakers somewhere nearby. It can even be easier to make friends by speaking French with people outside of French-speaking countries because you’ll have something in common with them that others don’t.

Another way to make friends because of your French efforts is by meeting other learners of the language. Learning that someone else is on their own French-learning journey is a great  chance to bond over your experiences. It immediately shows that you have some common interests, and you can help each other make progress.

It’s true that you don’t need to be able to speak or understand French in order to savor a plate of French cheeses with a glass of wine, but it could make the experience better. French culture has so much to offer: food, art, music, history, literature, and much more.

By speaking the language, you’ll be granted access to a purer version of all of France’s cultural beauty. Without having to listen to or read material through the filter of a translation or interpretation, you’ll get to experience subtle nuances and context that you might otherwise miss.

One of the benefits of the French language as a window to culture is that there are so many countries with French as an official language. There are island nations, many African countries, and of course parts of Europe that all boast their unique cultures. This makes it highly likely that you’ll be able to find several things you’re interested in.

It would probably be misleading to say that learning any new language is easy, but French is easier than most if you already speak English.

Languages like Mandarin, Finnish, Arabic, or Vietnamese are among the toughest for an English speaker to learn because of the lack of linguistic similarities. French, on the other hand, has plenty in common with English.

In terms of vocabulary, there are quite a few French words that English speakers will already be familiar with because they’re used in English: bourgeois, chauffeur, brunette, and chic are just some examples.

Although French verbs require much more conjugating and there are more contractions, the grammatical similarities it shares with English are greater than their differences. Word order is generally the same in both languages, which can save learners from some major headaches.

Pronunciation can take some getting used to; it can be one of the major hangups for a learner that is just beginning their language journey. That said, the French language is so revered for how it sounds that most people already have an idea of what French sounds like. This is a great advantage when it comes to attempting to mimic an authentic accent.

French is a Romance language, which basically means it is derivative of Latin. Most languages are related to other languages in some way, and this is certainly the case for French.

There are around 44 different Romance languages — some of the major ones are Spanish, Italian, Portuguese, and Romanian. All of these languages share a great deal in terms of vocabulary and grammar structures, which means learning any of them will prove beneficial when learning another. By learning French, you’ll give yourself a head start with all of these additional languages.

In addition to Romance languages, learning French should help you pick up any other language you decide to study in the future. Making new linguistic connections in your brain serves to better equip you in all new language endeavors. You’ll also have the chance to learn about yourself and how you learn best. Do you make quicker progress by getting a private tutor or by studying with a grammar book? Do you struggle with speaking or listening? Knowing this can be instructive in showing you what to focus on in future efforts.

Time and again, learning a new language has been shown to be beneficial for brain health. Learning anything new has a positive impact on the brain, but languages hold a special place in prolonging cognitive health.

By learning a new language, new neural connections are formed in the brain. This type of learning actually has the power to physically increase the amount of gray matter in your skull, which is a sign of a healthier brain.

Executive function is one of the primary areas in which the brain experiences benefit from language learning. This involves the ability to focus and to differentiate between important and unimportant information — it’s a skill that is massively important for performing high-level tasks and multi-tasking.