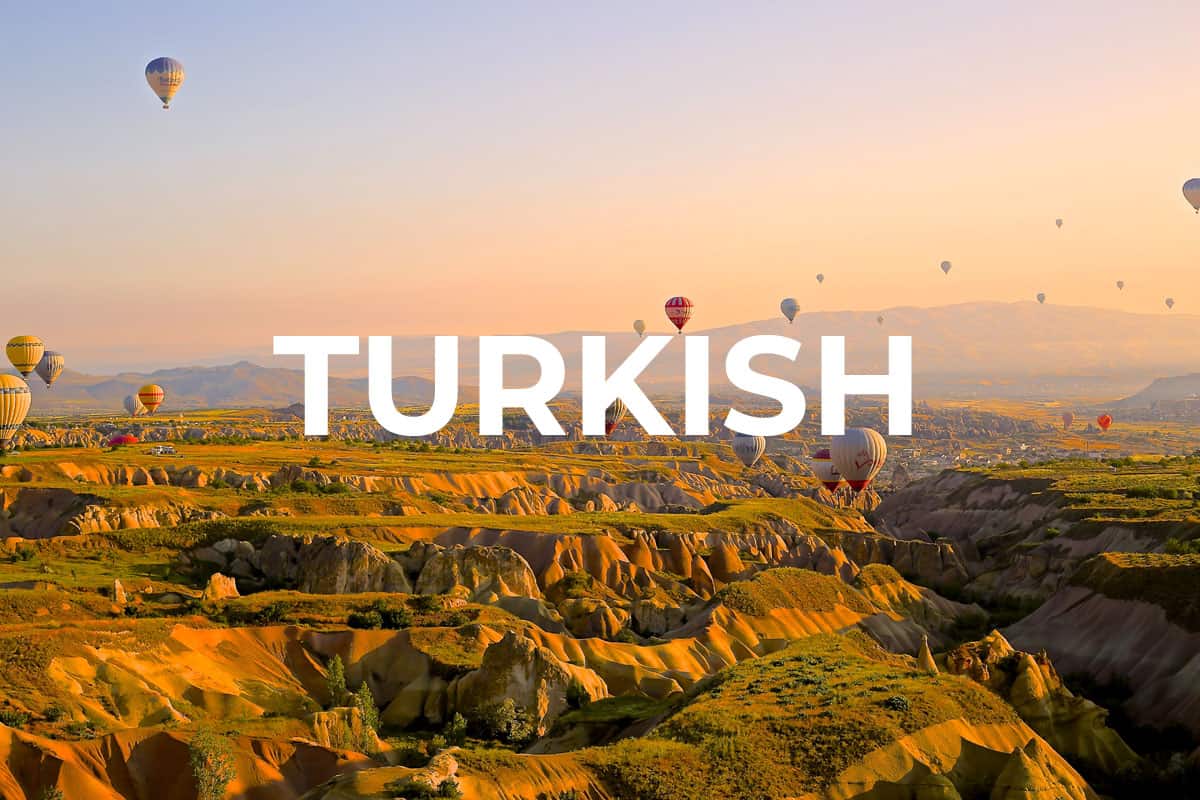 Learning Turkish places you with one foot in Europe and the other in Asia.

Written using a Roman script, yet with the majority of loan words from Arabic and Persian, Turkish is a fascinating mesh which can take a while for any learner to get one’s head around. Language lovers will certainly find themselves immersed in the many idiosyncrasies of Turkish.

With that introduction in mind, a sizeable number of you will be wondering, how hard is Turkish to learn?

The simple answer is that it is pretty hard but well worth the time you would invest.

If that has somehow piqued your interest then please continue to read the detailed sections below.

So, how hard is Turkish to learn really?

Turkish vocabulary is formed through either agglutination, which means to string together different language units, or compounding in which existing nouns, verbs and adjectives are linked together. Using the example of the base noun for eye which is göz we can see agglutination at work. In Turkish the additional language units are suffixed to the end of the word.

In the case of compounding, you take words that on their own are already words and we put them together to form new words.

This basically means that in Turkish there is a small set of basic vocabulary with which we can build an extensive set of new words.

In terms of loan words, Turkish has been influenced by a few key languages, some of which you may already be familiar with. These include Arabic, French, Persian, Italian, English, and Greek. In fact, around 14% of the 104,000 words in Turkish are of foreign origin. Of the foreign loans words, Arabic and Persian make up the sizeable majority and English comes in with around 538. Quick caveat, the words below may not be originally from English and so are technically not English loan words but they are similar to the English and therefore useful for anyone who is a native English speaker.

The language deconstruction method is by no means exhaustive, but it is a good base for understanding Turkish. It operates under the 80:20 Pareto principle, in that 80% of your languages needs are covered by 20% of the functional language.

Turkish has 40 phonemes made up of 24 consonant sounds and 16 vowel sounds. Turkish words are usually stressed on the last syllable and the language isn’t tonal.

Turkish was originally written in a Uyghur script. In the 15th century this was replaced by an Arabic script and then in 1928 it was again changed to a Roman alphabet.

In brief, there are a three key reasons to learn Turkish.

But, lets dive into this question further.

Turkish is an Turkic language. It is the official language of Turkey and Cyprus. It is also spoken in Germany, Austria, Bulgaria, North Macedonia, and Greece. It is spoken by 76 million people as a 1st language and 12 million as a 2nd language. It is regulated by the Turkish Language Association in Turkey.

Turkey is a large country in the Mediterranean, situated in the region of West Eurasia. It shares a border with Bulgaria and Greece to the west, Armenia, Azerbaijan and Georgia to the northeast, Syria, Iraq, and Iran to the southeast and the Black Sea to the north, the Aegean Sea to the west and the Mediterranean Sea to the southwest. The eastern region of Turkey is mountainous and home to three very important rivers, the Euphrates, Tigris and Aras. The central region is a high plateau and the western region is home to some of the more popular beaches and of course the famous city of Istanbul.

Turkey is undoubtedly a complex mix of east and west. It is famed for its awe-inspiring architecture in the form of the Blue Mosque or Hague Sofia. Along with the scrumptious local food with notable dishes including kebabs and baklava. There is also some amazing local art along with a sound literary history. In terms of culture, you could spend years exploring Turkey.

Turkey has hosted some of the world’s oldest major civilisations including the Hittite, Assyrian, Greek, Persian, Roman, Byzantine, Islamic, and Ottoman empires. In the modern era, since the founding of the Republic in 1928, Turkey has had an interesting time of it. Under the leadership initially of Mustafa Kemal the country was a one party state which put into motion a great deal of important reforms. A little later in the 1950s Turkey because a multi party democracy. The country since then has overcome military coups and separatist movements but remains somewhat democratically intact and hopefully will do for the foreseeable future.

The economy of Turkey is a interesting mix of modern industry and commerce along with a traditional agriculture sector which is interestingly the world’s largest producer of hazelnuts, cherries, figs, apricots, and pomegranates. It has a strong and growing private sector, nevertheless the government still has a significant role to play in industry, transport, banking, and communications.

The Foreign Service Institute (FSI) has put together a relative comparison of world languages including Turkish.

They rate Turkish as a category 4 language along with languages like Bulgarian, Kymer and Ukrainian. They believe it would take 44 weeks (1100 hours) to achieve a L3 proficiency in speaking and reading.

In attempting to learn anything it is best to first deconstruct the problem and then break down the learning task into manageable chunks. It is with this in mind that I recommend the following resources to help you in learning Turkish.