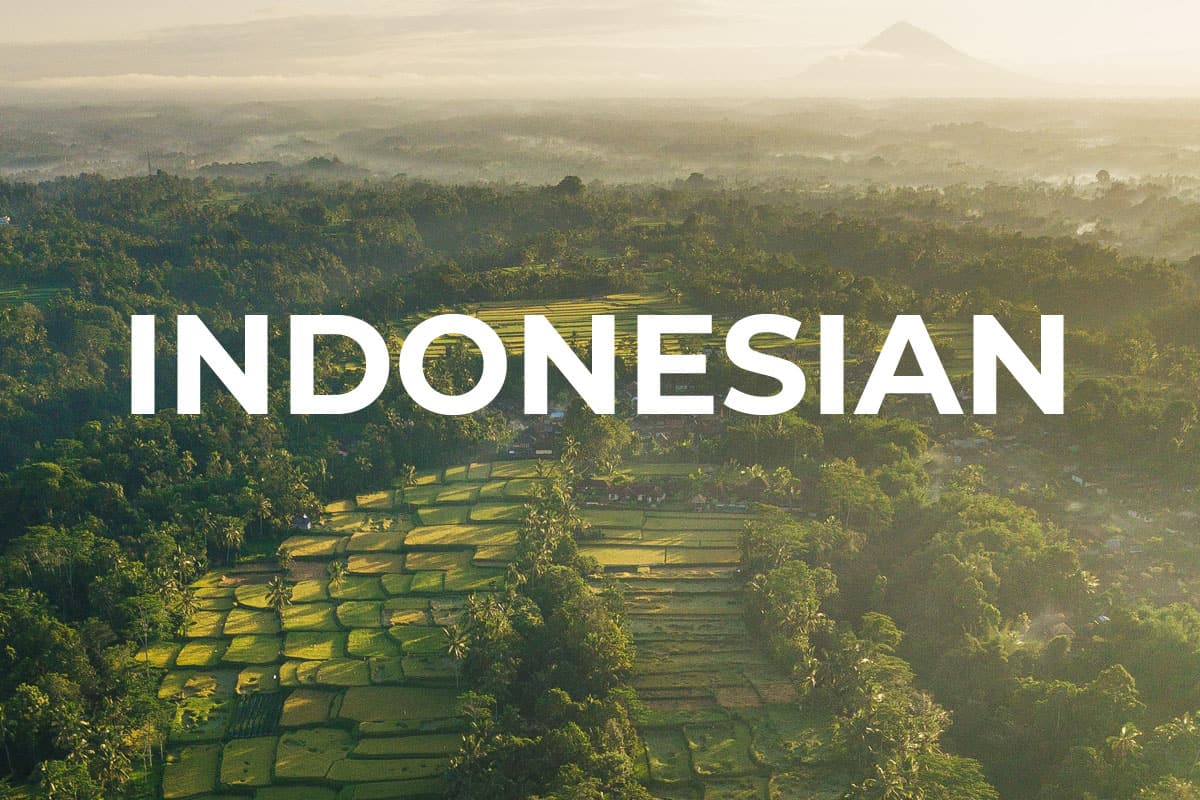 But, how hard is Indonesian to learn?

So that was a quick overview. Let’s now take a deeper look into the question.

How Hard is Indonesian to Learn Really?

The Indonesia language shares a lot of vocabulary with Malay, the language of Malaysia. This is because both languages developed from Old Malay. When the colonists arrived Malaysia was taken by the English and Indonesia by the Dutch. This meant that two languages began to diverge from one another. Indonesian began to adopt a lot of loanwords from the colonial language. That being said, around 80% of Indonesian vocabulary still shares a root with Malay.

Before the colonial era other languages also had an impact on Indonesian. These include Arabic, Portuguese and Chinese. In the era of globalisation English became an international language of business and in latter years Indonesian has adopted more English vocabulary.

So on balance, if you have a background in Malay you will be able to learn Indonesian with ease. On the other hand, if you are familiar with Dutch or English you can begin to pick up some new vocabulary quickly.

The use of affixes is the most common difficulty when learning Indonesian. That being said, there is no noun gender or case system so some aspects of Indonesian are pretty simple.

There are very few tricky sounds to pronounce in Indonesian. You also won’t find any tones so on balance pronunciation is one of the easier areas of the language.

Indonesian uses the same 26 letters of the Latin alphabet as English. Most spelling in the language is phonetic, meaning the rules are pretty consistent for how you pronounce the word given how it is written. There are 5 letters that are only used for loan words, these are f, q , v, x and z.

There are few languages as interesting as Bahasa Indonesia. Each person has their own reasons to study a language. So here are my 4 biggest reasons for taking on this language.

Indonesian aka Bahasa Indonesia is the official language of the Republic of Indonesia. However, only around 10% of the citizens of the country speak it as a first language, this is pretty low for any national language. However, the vast majority of citizens of Indonesia do speak it as a second language. As such the language is a strong force for national unity in a country of over 300 languages and over 17000 islands.

The language is used in the government both at a national and local level, within the education system, on TV and radio, and within the business community. Across the world there are many communities of Indonesian people and in the major cities of Malaysia, the Netherlands, Saudi Arabia and the USA you are bound to bump into some Bahasa Indonesia speakers. In total it is estimated that around 240 million people speak the language worldwide. This is a significant number.

What Is the Difference Between Indonesian and Malay?

Bahasa Melayu which is spoken in Malaysia, Singapore and Brunei and Bahasa Indonesia which is spoken in Indonesia are both forms of Malay. They evolved from Old Malay which is an Austronesian language with origins on the island of Sumatra. The two languages are mutually intelligible, however there are some key difference worth describing.

Also, Indonesia is a country of upward of 300 other languages, this has meant that the local languages have had an impact in different areas on the Bahasa Indonesia vocabulary and pronunciation. This has made the Indonesian language more open to changes in pronunciation and taking on new loanwords. In recent years from English due to globalisation.

Malaysia on the other hand doesn’t have so many local languages in the country so Malay was able to preserve its form more so than Indonesian. The language is seen as being more conservative to outside influence.

Is Indonesian a Useful Language?

There are a number of reasons why Indonesian can be useful, it just really depends on your circumstances. If you are hoping to travel around the country, English is going to be helpful, but Bahasa Indonesia is probably a very useful tool to also have access to. The vast majority of Indonesians speak it as a first or second language. You will find that the local people respect you more and treat you more favourably if you know some Indonesian. You can also detect problems and travel more safely if you can understand the situations which may develop around you.

If you plan to spend time in the surrounding countries of Malaysia, Brunei and Singapore your knowledge of Indonesian will help a great deal when speaking Malay. The two languages are mutually intelligible. Learning any language is useful. It exercises certain parts of the brain and gives many people a purpose and can broaden your interest in a country.

Should I learn Malay or Indonesian?

That being said, cultural or family family factors could also play a role. It is possible you are more drawn to one culture than the other and this could motivate you more. Ultimately, the two languages are mutually intelligible, if you learn one you are truly building a strong base for being understood in the other language.

2 thoughts on “How Hard is Indonesian to Learn?”