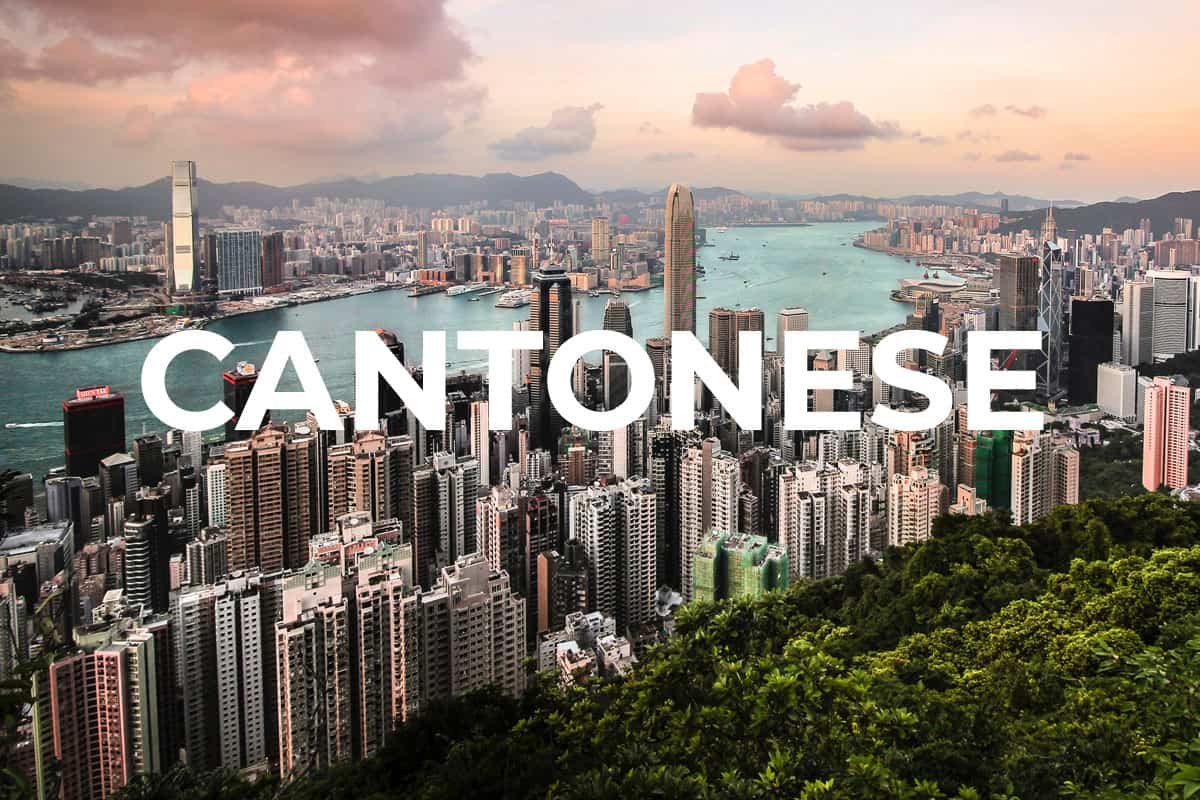 Cantonese is a must learn language for anyone with an interest in Hong Kong, or southern China more broadly. It is the underdog Chinese language to the big brother Mandarin and is in many ways a more fascinating and challenging language to take on.

So, how hard is Cantonese to learn?

The main issues with Cantonese relative to other languages are the lack of loans words and cognates from English, the number and difficulty of the tones and the complexity of the written script be it either traditional or simplified Chinese.

So that is your overview of Cantonese. Let’s jump in to the topic a little further.

How Hard Is Cantonese to Learn Really?

Cantonese vocabulary is formed from either single syllable words or multiple syllables grouped together to form a word. The combinations of syllables together can make some logical sense and make learning the new vocabulary easier and sometimes fun. For example 雪櫃 refrigerator which is made up of 雪 snow + 櫃 cupboard or another example of 雞公 rooster which is made up of 雞 chicken + 公 male. This can make forming mnemonics pretty easy, but a lot of the vocabulary isn’t so logically consistent.

Also, in some cases the vocabulary in Cantonese is formed by taking a loanword from English and mapping on already existing Cantonese sounds as approximations to the English sounds. Take the word 巴士 bus, pronounced baasi. As you can see they have taken sounds that closely align and plonked them together. There are lots of these in Cantonese.

Learning vocabulary in Cantonese is about dedicating the time and effort to the project. There are some shortcuts but learning the words requires you to learn the pronunciation and the characters. Keep this in mind as it effectively doubles the learning time when compared with vocabulary in a Latin alphabet language.

The keys problem areas of Cantonese grammar would be the use of aspect suffixes and the use of classifiers. However, the grammar is probably one of the easiest pieces of the Cantonese puzzle. Verbs are regular and don’t change for subject or tense. There are no cases and nouns are non gendered.

Most beginners find trouble learning the tones. All tonal languages have a steep learning for beginners but keep at it and you will be able to distinguish the tones and produce them well.

Cantonese can be written in 1 of 2 different styles of related writing scripts. These styles are Traditional Chinese and Simplified Chinese. There is also an informal written vernacular Cantonese form which you’ll often see in Hong Kong. This vernacular style better maps how Cantonese is spoken onto traditional Chinese characters but it is only really used in informal contexts.

These are the basic building blocks for writing in Cantonese. As you can imagine the process of learning this method is incredibly complex and can take many years. You should decide which of traditional and simplified you are going to use, and get started asap.

Cantonese is an official language in both Hong Kong and Macau where the vast majority of people speak Cantonese as a first language. Cantonese is also the dominant language in the Guangdong province of China. This is despite attempts by the government to limit its use.

In western countries like the USA, the UK, Canada and Australia, Cantonese is the most common of the Chinese languages found. This is because of the history of people from the Guangdong region moving to these countries over many decades.

In total there are believed to be around 68 million speakers of Cantonese worldwide.

How Old is the Cantonese Language?

Cantonese emerged as the dominant dialect of Yue Chinese which is spoken in the southern part of China. This dominance began during the Southern Song dynasty (960 – 1279). From then the language spread across much of southern China.

Canton, now Guangzhou, was the major city of Guangdong province and it developed as a commercial hub in the 18th century and was one of the earliest areas to open up to trade with colonial powers. As such, Cantonese was the language most used for communication by foreigners when interacting with the Chinese.

Is Cantonese a Dying Language?

In mainland China excluding Hong Kong and Macau, Cantonese is being crowded out by Mandarin. Mandarin is being promoted as the language of government and education. Fewer and fewer people are speaking it in Guangdong province and given the large influx of Mandarin speaking migrant labour it seems few people are trying to promote the language. That being said, there are still television shows and newspapers in Cantonese. In truth, lesser dialects are even more at risk of being completely lost in southern China. Given the numbers, it would be a long time before Cantonese is fully lost from mainland China.

In Hong Kong and Macau, Cantonese is the official language. It is used in government, the media, education and by almost all the local people. In recent years, many people have rallied to the defence of the language and it looks to be in a more sustained stable position. That being said, those locals who want to do business and spend a lot of time in mainland China will find that they are increasingly expected to learn and use Mandarin.

In the Chinese communities abroad, Cantonese was for a long time the dominant language spoken. Traditionally those who left China to live abroad came from the southern regions of China and so they spoke Cantonese. However, as the rest of mainland China has become richer, other people from other regions of China speaking Mandarin have begun studying or moving permanently abroad. This has changed the Chinese languages being spoken abroad. In urban centres in Canada, Australia and the USA you can increasingly hear Mandarin being spoken.

Is Cantonese Chinese Simplified or Traditional?

Cantonese is the term used for the dialect of Yue Chinese spoken in HK/Macau, Guangdong and many Chinese communities around the world. The spoken language can be represented in a number of written forms. Simplified Chinese in Guangdong, Traditional Chinese in Hong Kong and Macau. There is also a vernacular written Cantonese which can be found in Hong Kong which more closely aligns with the spoken Cantonese. Simplified and Traditional Chinese also used to represent Mandarin in China and Taiwan respectively.

So to answer the question. Cantonese can be written in both simplified and traditional written Chinese.

If the Cantonese speaker has had no exposure to Mandarin then the two languages are mutually unintelligible. The sounds are different, the vocabulary is different and the grammar is different.

However, it is also important to note that most Cantonese speakers have had a lot of exposure to Mandarin. This allows them to be able to speak Mandarin and understand its usage. If you lived in Guangdong, you probably learnt Cantonese from your family but at school and in the media you are going to be exposed to a lot of Mandarin.

So, to answer the question, Cantonese speakers can often understand Mandarin because of the exposure to the language but the languages themselves are technically unintelligible.

Is Cantonese Harder Than Mandarin?

As is often the case, the answer is conditional on a number of things being true. Lets assume you haven’t had exposure to either language and that we are not assessing the relative merits of the writing system as Cantonese and Mandarin speakers use both Traditional and Simplified characters in different locations. Lets also assume you are familiar with English.

In terms of vocabulary, there are more English loan words in Cantonese than in Mandarin mainly because Hong Kong was a colony of the UK for so long. This would make building vocabulary easier to pick up in Cantonese.

With grammar, both Mandarin and Cantonese are subject-verb-object. However, for things like direct objects vs indirect objects or word order for comparative sentences the grammar is different. These differences don’t cause differing complexity so on balance, the relative grammar difficulty is similar.

For pronunciation the major difference is tones. Mandarin has 4 tones plus a neutral tone within a narrow range of pitch, Cantonese on the other hand has 6 tones within two ranges of pitch. This makes Cantonese more difficult for English speakers. In terms of actual range of distinct sounds, both languages have sounds which would be new to English speakers but the difficulty is equally spread between the two languages.

Bringing together all these ideas, on balance i’d have to say Cantonese is more difficult than Mandarin mainly because of the increased difficulty of learning and using 6 tones.