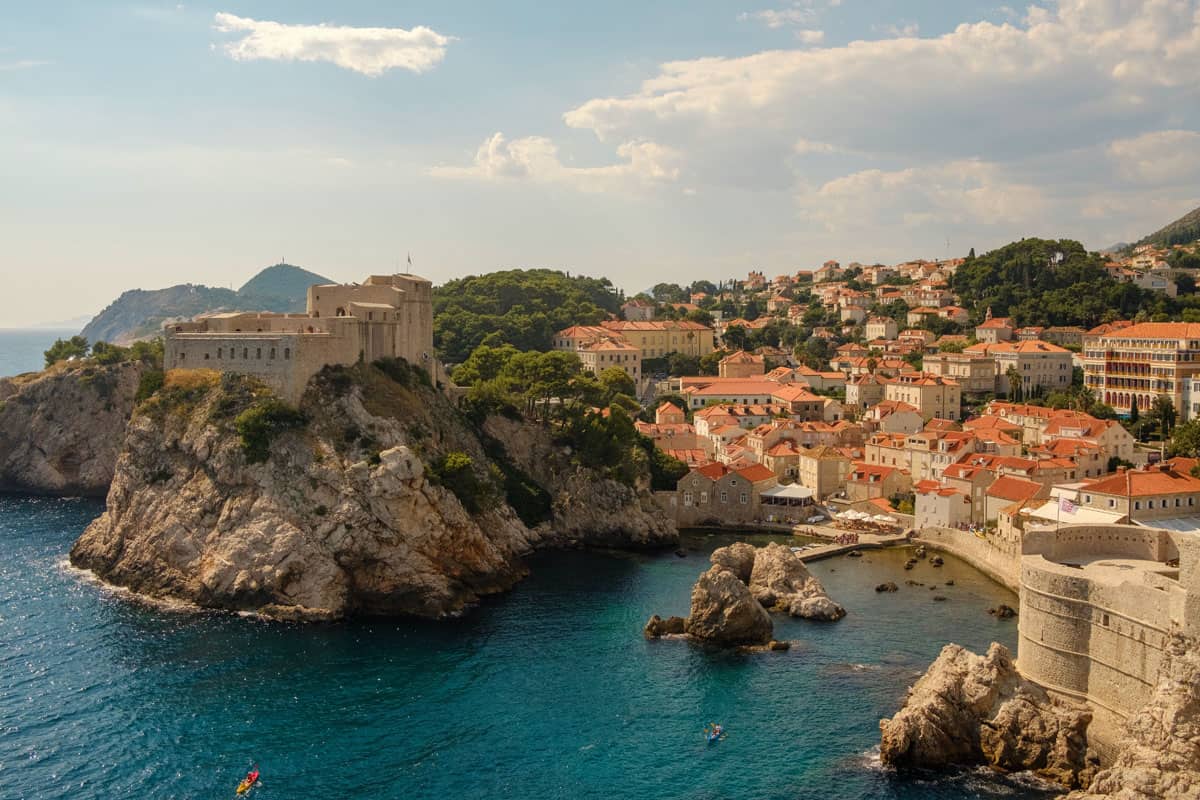 Croatia is a Central European country that shares a border with Slovenia, Hungary, Bosnia and Herzegovina, Serbia, and Montenegro. Croatia arguably has the prettiest coastline in the Balkan Peninsula with its turquoise sea, and beautifully preserved beaches, and most of its towns have impressive historic city centers.

Croatia’s population is about 4.6 million people. Out of the total population about 2.2 millions or about 49% of Croatians speak English. While traveling around the city, and gazing at the cities unique blend of architecture styles, it seems important to note that while only half of Croatian demonstrate an English competency, it is important to learn some Croatian phrases to truly experience the country’s wonders. In the context of other central and southern European countries the Croats speak pretty good English. The young, rich and urban types tend to speak better English.

Let’s dive in further to this fascinating country.

English Use in Major Cities in Croatia

What Languages are Spoken in Croatia?

Is English Necessary in Croatia?

As a tourist traveling in Croatia, English is commonly spoken, with more than half the population possessing some form of English understanding. Accurate and up-to-date statistics are somewhat hard to find, but the main tourist regions, especially along the coastline, you should have no problem using English with anyone under fifty. In inland and rural regions, you might struggle to find a large amount of English speakers.

As a local, it is common in many countries to at least have one television channel dedicated to English media. The same is true in Croatia. High fluency rates are sometimes dictated by undubbed English language television and movies. Consuming this media source offers a great opportunity to pick up the language in a way that more traditional schooling might not offer. To learn English, younger people should be exposed to forms of English that are more than only the written and verbal form in a classroom setting.

After being featured in the award-winning television show, Game of Thrones, Croatia has experienced a rise in popularity among both English teachers and visitors. Usually English teachers find jobs and start teaching by interviewing locally in Croatia during the big recruiting seasons in September and agin in January. Most contracts expire at the end of June.

For teachers who are interest in teaching in Croatia, a bachelor’s degree is necessary, and an internationally recognized TEFL certificate is necessary to qualify for most teaching positions. International schools require higher qualifications. For applicants, a postgraduate degree is required to qualify, and relevant teaching experience is necessary too. Due to higher requirements, the salary is usually higher for these jobs. Most jobs can be found in major cities like Zagreb, Split, and Dubrovnik.

There are many useful resources for people looking for jobs in Croatia. The first are services offered by the public employment agencies that are run by the Croatian Ministry of Economy, Labor and Entrepreneurship. They provide many useful jobs and can be found at the website https://www.hzz.hr (Croatian language). While most resources are Croatian language, there are some job portals that offer many English speaking jobs.

Life in Croatia, a Confluence of Styles and Architectures

Due to its geographical location, Croatia influenced by four distinct cultural spheres. Croatia sits at a crossroads of Western and Eastern influences – since the schism between the Western Roman Empire and the Byzantine Empire – Croatia has experienced a confluence of different styles. The Illyrian Movement was an important moment in Croatian history. It was a time when Croats developed their own national identity.

Language is a powerful tool to help recognize a country’s identity. Since the 19th century, historical events helped shape the Croatian language, and it gave many unprecedented changes in arts and culture, and the birth of many important historical figures.

Croatian architecture reflects influences from neighboring countries. In public spaces and buildings in the north and central regions, Austrian and Hungarian influences are present. Architecture found along the coasts of Dalmatia and Istria exhibit Venetian influence. In cities and towns, wide public squares are named after cultural figures, parks, and pedestrian zones are characteristic to the cities. In particular, wide-scale Baroque urban planning took place, specifically in towns such as Tvrda, Varazdin, and Karlovac. Later influence of Art Noveau is reflected in contemporary architecture.

The architecture along the coast exhibits a Mediterranean style, with a heavy Venetian and Renaissance influence in major urban areas exemplified by the works of Giorgio da Sebenico and Niccolo Fiorentino such as St. James’ Cathedral in Sibenik. The oldest surviving examples of Croatian architecture are churches from the 9th century, with St. Donatus in Zadar as the most prominent church.

Wow, what a country. Worth your time, and certainly a great place to travel and work. If you don’t invest time in the local language you should be able to easily survive with just English.

If you do have the time, then a local language would be useful.

Bonus – The Don’ts of Visiting Croatia